For many readers, the above title will conjure up memories of the 2008 housing crash caused by the proliferation of subprime mortgages and the subsequent tsunami of defaults. But a better corollary for the coming Biden bust is the Carter crash that occurred three decades earlier. During the final two years of Carter’s term, sales of existing and new homes collapsed because the Fed was forced to raise interest rates sharply to get double-digit inflation under control. This, in turn, produced double-digit mortgage rates that priced millions of potential buyers out of the market.

Like our current chief executive, Carter was delusional about the threat inflation posed to the economy. When he was elected in November of 1976, it had been slowly waning for some time. The New York Times reported that inflation was at a four-year low of 4.8 percent. This lulled Carter into a false sense of security, and he pushed a disastrous economic stimulus bill through Congress. By the end of 1979, the Washington Post was lamenting that inflation had reached 13.3 percent. In the 1980 election, Carter was defeated by Ronald Reagan, whereupon Fed Chair Paul Volcker wrestled inflation into submission by raising interest rates.

President Biden was a member of the U.S. Senate during Carter’s tenure in office, but he seems to have gleaned no message from the latter’s economic failures. Indeed, Biden is repeating the very same mistakes. He was oblivious to the inflationary potential associated with his $1.9 trillion “stimulus” plan. And, just as Carter ignored the warnings of Milton Friedman in 1977, Biden dismissed the counsel of Obama-era economists such as Lawrence Summers. Meanwhile, Fed Chair Jerome Powell also managed to forget the lessons of the Carter era. As economists Thomas J. Sargent and William L. Silber write in the Wall Street Journal:

The Fed lost control of inflation by abandoning its decades-long strategy of pre-emptive restraint—that is, tightening before inflation takes hold. That policy, promoted by Fed Chairman Paul Volcker in the 1980s, has delivered price stability for nearly 40 years.… We believe that the policy of pre-emptive restraint is what anchored inflationary expectations after the mid-1980s by preventing inflation from taking hold. The country is now paying for the Fed’s amnesia.

And the price is very high indeed. Not only has inflation spiked to 8.6 percent, the dilatory response of the Fed is affecting mortgage rates downstream. Its belated increase of the federal funds rate by 75 basis points in June has already pushed mortgage rates higher. At the end of last week, Freddie Mac reported an average rate of 5.78 percent, more than twice what it was when Biden was inaugurated. If the Fed bumps the funds rate another 75 basis points in July, as it is expected to do, mortgage rates will blow past 6 percent and the real estate market will probably be headed for a downturn comparable to the 1978–81 collapse.

If you’re too young to remember the Carter era, it may be difficult to imagine double-digit mortgage rates. If so, consider what you would have said to anyone who predicted two years ago that you would now be paying $5.00 a gallon for gasoline. Likewise, the possibility of committing to a double-digit mortgage rate to buy a house may seem absurd. In 1980, however, many had to choose between doing just that and not buying at all. For some potential buyers, there was no choice. They couldn’t afford the mortgage payments. The following illustrates how high rates got before the voters sent Carter back to Plains: 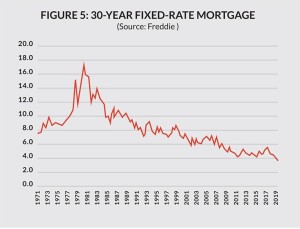 This spike in mortgage rates to 18 percent produced an all-too-predictable effect on the housing market. Mark J. Perry of the American Enterprise Institute succinctly summed it up in a comparison to the 2008–09 real estate collapse: “Between 1978 and 1981, existing-home sales fell by 50%, from 3.986 million homes in 1978 to 1.990 million homes by 1981 (data here), and new home sales and building permits fell by similar amounts.” This inevitably led to an unemployment increase for construction workers, a shrunken market for construction materials, and cascading contractions in various downstream industries.

But it isn’t necessary to let things get that bad, if Biden will finally accept responsibility for inflation and encourage the Fed to take the painful steps required to get it under control now. Sadly, his recent outburst blaming gas stations for profiteering suggests that he won’t do the right thing. He will continue to offer gimmicks like the gas tax holiday and put off the difficult decisions. The longer that goes on, the closer Biden gets to Carter country. And that is no country for a healthy housing market. Brace yourselves for the Biden Bust.

David Catron is a recovering health care consultant and frequent contributor to The American Spectator.

Appeared at and reprinted from The American Spectator