In May, I was privileged to hear Lauren Monroe play her first show ever in Nashville at the City Winery. Lauren Monroe is a folk/Americana singer who just happens to be married to Def Leppard’s Rick Allen.

Monroe was born in Queens, New York. At age 5, she was given her first guitar by her grandfather. She learned some chords and started taking lessons. By age 6, she began writing songs. She began playing at folk groups and church.

Monroe reflects, “Spirituality and songwriting were always one thing for me.”

Initially, Monroe thought she wanted to be a priest, but being Catholic, she soon learned that girls couldn’t be priests. She put her efforts into singing, songwriting, and dancing. She got master’s degrees in choreography and psychology. She studied massage therapy and healing arts.

“I did things that involved music, art, dance, and healing,” she states.

I have always thought, personally, that music is a healing force, and it is part of the reason that I continue to write my blog featuring various artists and all kinds of music.

She reminds, “The idea of music being healing goes back to our ancient ancestors where they used drums and voice to heal one another.”

And even though she is Italian-American, Monroe has always felt a connection to the Native Americans and has studied with them as well as participated in native pow-wows.

In her 20s, Monroe moved to San Francisco and began performing acoustically, later moving to Boulder, Colorado, and forming her band, Coy Kindred. The band toured the Western U.S., playing its rugged blend of rock, blues, and funk at festivals, theaters, saloons, and clubs. 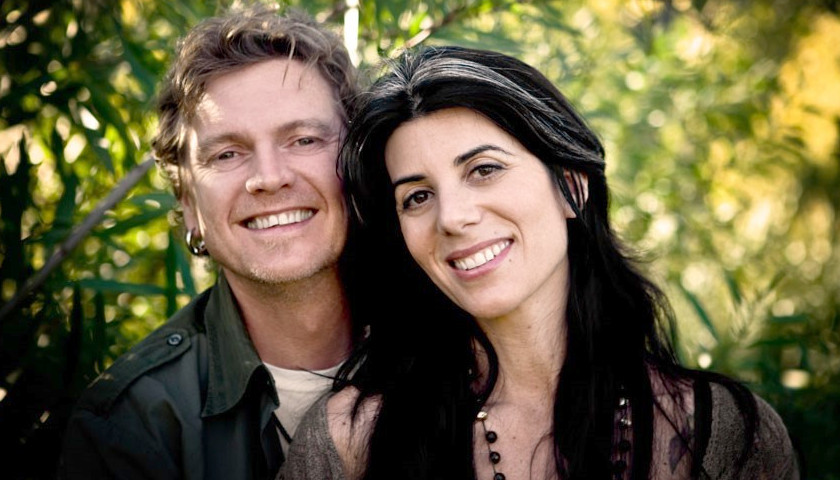 As a massage therapist and energy healer, Monroe prioritizes working with those (especially veterans) who may be experiencing PTSD. Several years after Rick Allen’s tragic accident, a mutual friend introduced him to Monroe so she could work with him and help him grapple with some issues that had not been addressed since the car accident.

“We stayed in touch as friends until we realized our ‘working only’ relationship wasn’t going to work out much longer. We become close and the rest is history.”

As she was looking into alternative treatments for Allen, they met warriors with similar issues and they started sharing these various modalities for healing.

She and Allen co-founded Project Resiliency and the Raven Drum Foundation, which promotes wellness through complementary and alternative medicine (CAM) like music and drumming. The foundation’s mission is to serve, educate, and empower veterans dealing with PTSD and combat trauma, people in crisis, and other at-risk populations.

She exclaims, “I think the types of human beings who give their service are the most incredible humans. They know about loyalty and commitment and discipline and being part of a team and helping one another. They know about healing too; they just don’t know it yet.”

While Monroe enjoys creating music and performing, her bigger purpose is to bring awareness around empathy, compassion, and suffering that others may be experiencing.

In no song is her message clearer than her song “Big Love,” which she released in 2020 during the pandemic.

She states, “This video was created with loving intention to open hearts and minds as we move together to grow and love as we share our pain and suffering. I believe in the potential of our humanness and our ability to come together and rise by lifting up one another. This has been my life’s work and my soul’s purpose.”

In 2021, Monroe released the album Under the Wolf Moon which contains “Big Love,” “When the Rain Comes,” and the breathtakingly beautiful “Run with Wolves.”

Due out on September 9th is the singer/songwriter’s next project, Messages from Aphrodite, featuring songs that are about being strong and resilient.

“I chose Aphrodite, the goddess of love and beauty to tell these stories from a higher feminine perspective when looking at love in the world, all kinds of love,” she explains.

One thing she believes is that “the strength and power of the feminine are what it is going to take to heal so many levels of what is happening in our country. Women are fundamentally strong. We are often dismissed but we love holistically.”

Her most recently released song, “Sparrow,” is hauntingly beautiful and was written as a way to help people to have hope after losing someone.

“We’ve lost millions of people in the last couple of years, whether it’s to war, combat, COVID, shootings. It’s all been about loss. Most people believe in an afterlife and they feel the presence of their loved ones in certain ways. This song gives people a doorway, especially through nature, to let me know when they are missing someone and they feel them, that’s them.”

She believes you can access people who have passed by your awareness. The lyrics in the song “Sparrow” helps to guide them if they will trust it and be intuitive.

One of the most uplifting songs off the upcoming album (and my personal favorite) is “Kiss Me Now.” With lyrics like You’re a brave one to be alive/ And I’m here to testify/ Ain’t nobody quite like you/ That rise above the world the way you do/ So Kiss me now/ Won’t you kiss me now/ We ain’t got time ’til the fire goes out, she reminds us to be in the moment with the ones we love.

And while Monroe is pleased with any notoriety she may get with her music, her main goal is for people to be drawn to the music so they can have a healing experience – and that might not be a top 10 radio song.

She confirms, “This isn’t about being a pop star. This is about helping people.”

On her website she states, “Rick and I both have always felt that our life’s purpose together is to offer the most authentic expressions of who we are with the intention of awakening and strengthening others. The music flows from this dream. This is the dream that I’ve sung about since I was a child.”

Their purpose is never more evident than when working with veterans, as Allen shares his personal experience regarding overcoming tragedy and Monroe shares her music that heals.

Connecticut Minimum Wage Not a Guarantee to End Poverty