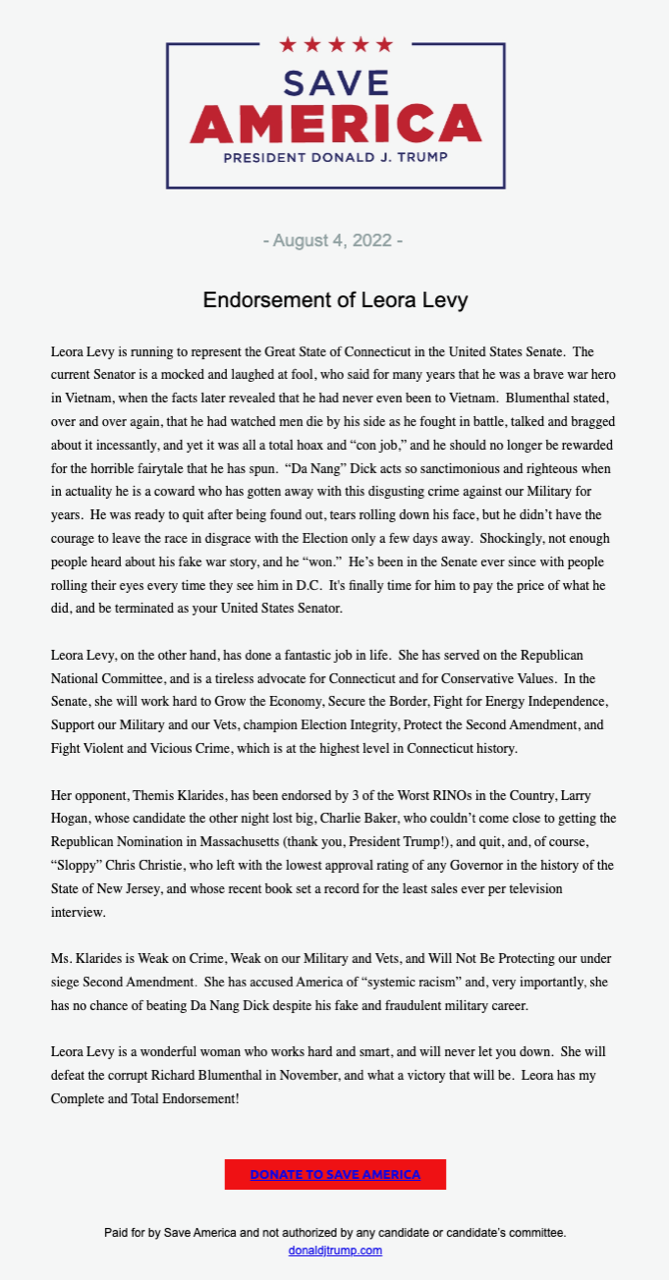 “Leora Levy is running to represent the Great State of Connecticut in the United States Senate,” Trump said in the statement regarding his endorsement.

Thank you President Trump! I’m honored to have your COMPLETE and TOTAL endorsement!

I’m the ONLY candidate who can Beat Back Blumenthal and hold Joe Biden accountable.

“The current Senator is a mocked and laughed at fool, who said for many years that he was a brave war hero in Vietnam, when the facts later revealed that he had never even been to Vietnam,” the former president continued about Blumenthal, and added:

Blumenthal stated, over and over again, that he had watched men die by his side as he fought in battle, talked and bragged about it incessantly, and yet it was all a total hoax and “con job,” and he should no longer be rewarded for the horrible fairytale that he has spun. “Da Nang” Dick acts so sanctimonious and righteous when in actuality he is a coward who has gotten away with this disgusting crime against our Military for years. He was ready to quit after being found out, tears rolling down his face, but he didn’t have the courage to leave the race in disgrace with the Election only a few days away. Shockingly, not enough people heard about his fake war story, and he “won.” He’s been in the Senate ever since with people rolling their eyes every time they see him in D.C. It’s finally time for him to pay the price of what he did, and be terminated as your United States Senator.

“Leora Levy, on the other hand, has done a fantastic job in life,” Trump said. “She has served on the Republican National Committee, and is a tireless advocate for Connecticut and for Conservative Values. In the Senate, she will work hard to Grow the Economy, Secure the Border, Fight for Energy Independence, Support our Military and our Vets, champion Election Integrity, Protect the Second Amendment, and Fight Violent and Vicious Crime, which is the highest level in Connecticut history.”

Trump noted that former state lawmaker Themis Klarides, the endorsed candidate of the Connecticut GOP, has also been endorsed “by 3 of the Worst RINOs in the country, Larry Hogan, whose candidate the other night lost big, Charlie Baker, who couldn’t come close to getting the Republican Nomination in Massachusetts (thank you, President Trump!), and quit, and, of course, ‘Sloppy’ Chris Christie, who left with the lowest approval rating of any Governor in the history of the State of New Jersey, and whose recent book set a record for the least sales ever per television interview.”

Ms. Klarides is Weak on Crime, Weak on our Military and Vets, and Will Not Be Protecting our under siege Second Amendment. She has accused America of “systemic racism” and, very importantly, she has no chance of beating Da Nang Dick despite his fake and fraudulent military career.

During a debate in July featuring Levy, a Greenwich fundraiser, Klarides, and immigration attorney Peter Lumaj, both Levy and Lumaj said they would support former President Donald Trump, if he were a Republican presidential candidate in 2024. Klarides, however, said she would have to consider the other candidates “on both sides.”

“Leora Levy is a wonderful woman who works hard and smart, and will never let you down,” Trump concluded in his statement. “She will defeat the corrupt Richard Blumenthal in November, and what a victory that will be. Leora has my Complete and Total Endorsement!”

To be endorsed by a true America-first patriot means everything to me and to the voters in Connecticut. President Trump’s endorsement proves to voters that all states are in the running to flip red, but it will only be possible if we have the best candidates on the November ballot. With 9.1% inflation, an invasion at our border, and indoctrination in our schools, everyone is aware our country is nothing like what it was two years ago under President Trump’s leadership and policies. President Trump understands that electing principled, conservative outsiders to the Senate is the first step to restoring America to greatness.

The Connecticut primary is on August 9.